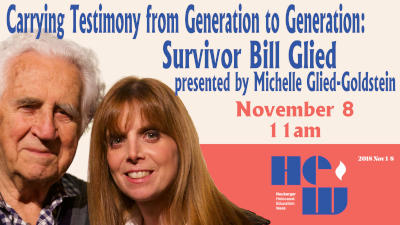 On April 29, 1945, Bill Glied was liberated from Dachau Concentration Camp. He was 14 years old and the only surviving member of his family. After years of silence, Bill began telling his history to his family in the 1980s and then he continued to share his experiences with thousands of children and adults across the country and around the world. He believed that he needed to speak so that history would not be forgotten. In 2017, Bill became concerned about the future of Holocaust remembrance and developed a program for Survivor testimony to be carried from generation to generation. Through this program, his daughter Michelle filmed an in-depth interview with her father. Since his passing in February, 2018, Michelle, with the aid of this interview, historical artifacts and photographs, tells Bill Glied’s story in his honour and memory, and to ensure the Holocaust is never forgotten.

Please join us in hearing testimony carried from generation to generation.