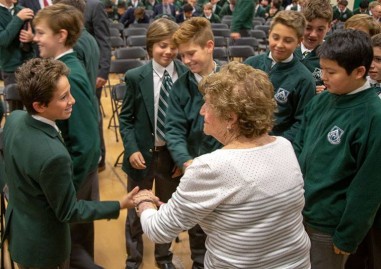 "The day was very thought-provoking and challenging. Each session offered something different for our students to think about and extended their understanding of the events of the Holocaust and their impacts on all of us today."
- Teacher from Sacred Heart CHS reflects on this year's High School Student Symposium on the Holocaust 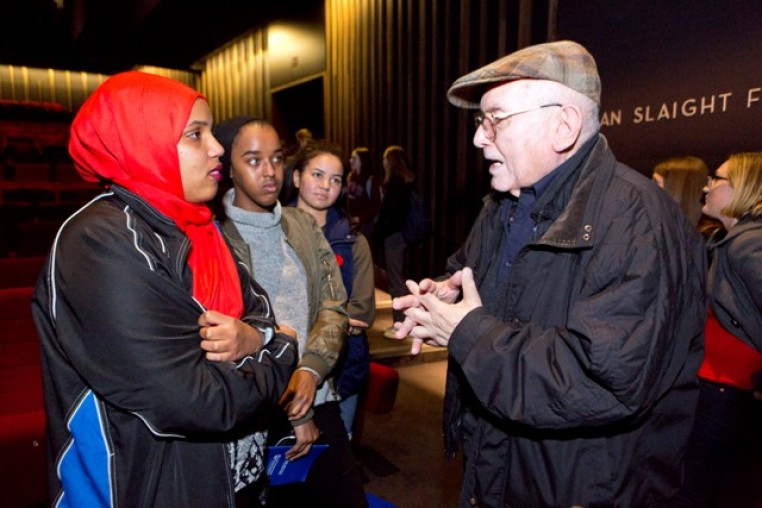 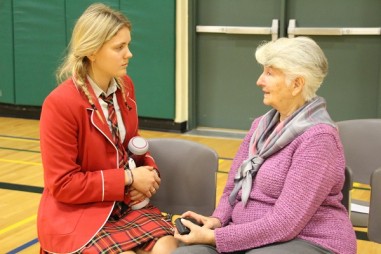 "This experience made the Holocaust REAL for the students, not just another far-removed historical event." - Father Michael McGivney Catholic Academy shares their thoughts on the 2018 Student Symposium 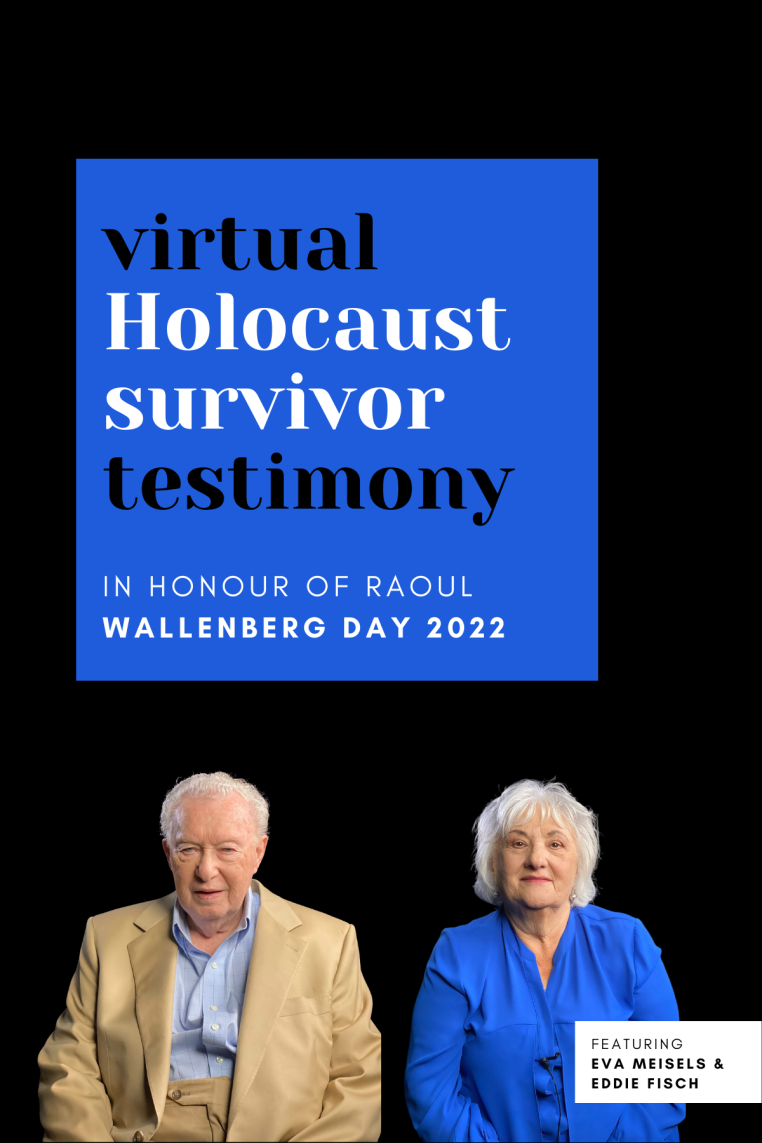 Join the Neuberger in honour of Raoul Wallenberg Day 2022, for a special opportunity to hear from Holocaust survivors Eva Meisels and Eddie Fisch, both whose experiences involved Swedish protection.

Eva Meisels was born in Budapest, Hungary, in 1939, an only child. After her father was taken to a forced labour camp in 1942, Eva and her mother were in the Budapest Ghetto and eventually, a safe house. They obtained false papers from Raoul Wallenberg and were liberated by the Soviet Army. After the war, Eva went back to school and immigrated to Canada in 1956.

Edward Fisch was born in Budapest, Hungary in 1933. In 1942, his father was conscripted into the Slave Labour Battalion in Hungary; his mother was deported to Auschwitz-Birkenau in the spring of 1944. Together with his younger brother, he survived in Swiss protected houses, and then in the Budapest ghetto until liberation in January 1945. Edward’s mother survived but his father was murdered by the Arrow Cross. Edward immigrated to Canada in 1948.

Raoul Wallenberg Day was designated by the Government of Canada in 2001 to honour Wallenberg, Canada’s first honorary citizen, who is credited with saving the lives of tens of thousands of Hungarian Jews. When Soviet forces liberated Budapest in February 1945, more than 100,000 Jews remained, mostly because of the efforts of Wallenberg and his colleagues. Wallenberg disappeared on January 17, 1945. His righteous heroism is a legacy and inspiration for all Canadians. For more information about Raoul Wallenberg, please visit the Holocaust Encyclopedia of the USHMM. 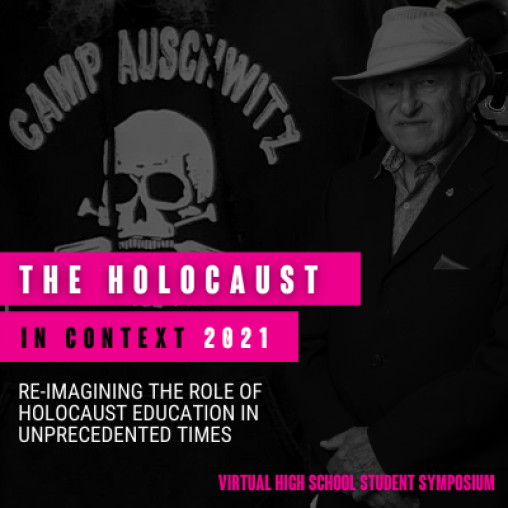 The Holocaust in Context: 2021
Re-imagining the role of Holocaust education in unprecedented times

We often talk about how the past can help inform our present day and future understandings of the world we live in. This exclusive symposium designed for high school students will reinforce this notion by providing a framework for understanding why we need to continue to study the Holocaust to better understand ourselves and our society. Why is the Holocaust still relevant? What types of present-day connections exist? What will be Holocaust education’s role in the future and why do we even care? Are just some of the questions we will explore in this year’s unique online symposium.

Through five concise 10-minute sessions, designed to shed light on some of the most contemporary aspects of Holocaust education and the most frequently asked questions about the Holocaust, Neuberger professionals, and special guests will come together to explore the ongoing relevance of this history for today’s learners. 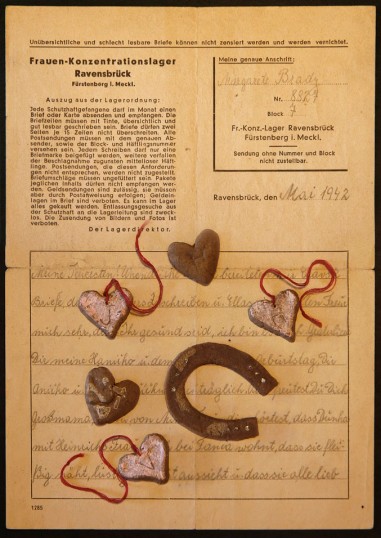 The Brady Resource Kit - Available ONLINE ONLY due to COVID-19 restrictions.

The Neuberger’s latest educational resource is based on the principles of inquiry-based instruction and encourages learners to discover facts to independently contextualize history. By examining and analyzing archival documents and replica artefacts, exploring excerpts of recorded survivor testimony, students learn about the Holocaust through one family’s experiences. In doing so they wrestle with questions and situations that may challenge preconceived ideas about the Holocaust and Jewish responses; encouraging a deeper learning experience. As a result of this approach, students will remember concepts and knowledge that they discovered on their own.

Book your in class visit with Neuberger education professionals by submitting the form to the right. At present, this program is only available to schools in the GTA.

Image at left: Letter and bread charms from Marketa Brady to her children, Hana and George. Marketa Brady was sent to Ravensbrück concentration camp in 1941 and eventually deported to Auschwitz in October 1942 where she was killed. While in Ravensbrück, Marketa was rarely allowed to send letters home. In one of these letters, she included in the envelope a gift for her two children and their cousin Vera. Marketa had made charms out of the only possession she had; her rationed bread. Image courtesy Brady Family. 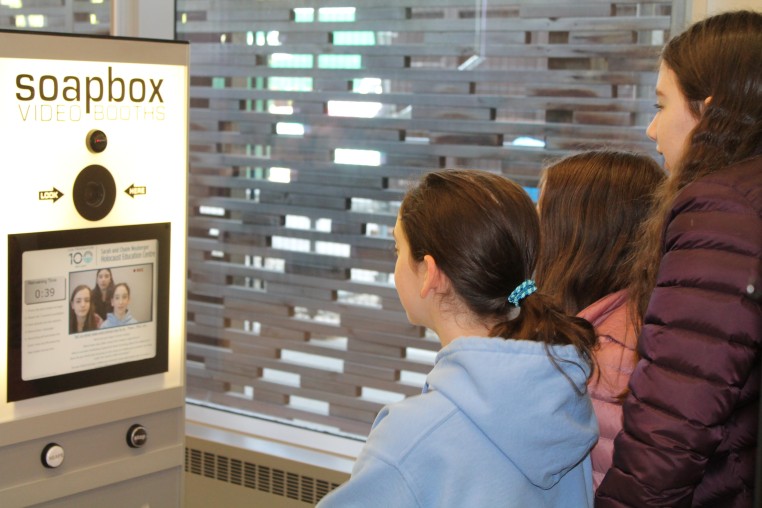 MIDDLE SCHOOL SYMPOSIUM ON THE HOLOCAUST

The Neuberger presents a specially designed program for student in grades 6-8.