Just 76 years since liberation, a new challenge threatens the memory of the Holocaust. Spread instantly via social media and normalized through pop culture, the surge of Holocaust distortion, myths and misinformation has become increasingly common and dangerous.

It is evident in video game culture, the re-writing of Holocaust history by authoritarian leaders, the yellow star used by anti-vaccination protesters, memes with twisted Holocaust-laden imagery, the appearances of youth dressed as victims of the Shoah on TikTok—to name just a few recent examples.

Protecting the facts, countering falsehoods, and safeguarding the memory of the Holocaust is at the core of HEW 2021. Join us November 1 for the launch of HEW 2021 to dispel the myths and misinformation that fuel antisemitism and hatred. Together, we will secure the legacy of the Holocaust and ensure that our society remains an inclusive and respectful place for all Canadians.

Program highlights include staff writer for the New Yorker Andrew Marantz on social media and the alt-right, an in-depth look at the insidious Holocaust iconography found in video game culture, a Dialogue for Descendants symposium, a film program exploring Holocaust and residential school denial, and a moving Kristallnacht commemoration with a sneak peek at the plans for the new Toronto Holocaust Museum. There will be ongoing Zoom group presentations with Neuberger Survivor Speakers. 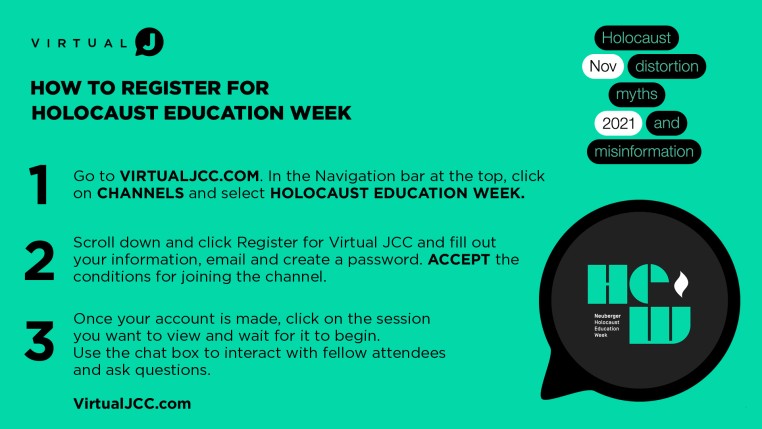 The Neuberger and the Virtual J are excited to partner once again to bring Holocaust Education Week 2021 to the comfort and safety of your home!

If you do not have an account with the Virtual J, register for free access to HEW 2021 programs on the Virtual J's online platform here. Be sure to select "Holocaust Education Week" on the dropdown menu when registering. You will then have access to all HEW programs at  virtualjcc.com/channel/holocaust-education-week-2021.

ALL HOLOCAUST EDUCATION WEEK PROGRAMS ARE FREE-OF-CHARGE THANKS TO THE GENEROUS SUPPORT OF OUR SPONSORS AND DONORS. TO SUPPORT HEW AND THE NEUBERGER'S YEAR-ROUND PROGRAMS, PLEASE CONSIDER A DONATION.