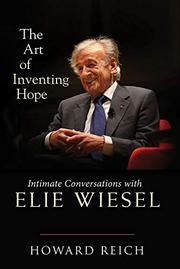 Chicago Tribune veteran Reich (Portraits in Jazz: 80 Profiles of Jazz Legends, Renegades and Revolutionaries, 2014, etc.), whose parents were survivors of the Holocaust, looks back on his greatest opportunity as a writer and journalist: numerous conversations with the Nobel laureate. This brief but moving work artfully intertwines Wiesel’s words of wisdom with Reich’s quest to further understand his own family’s untold story.

Howard Reich has covered the arts for the Chicago Tribune since 1978. He has written five books: “Portraits in Jazz,” “Let Freedom Swing,” “Jelly’s Blues”, “Van Cliburn” and “Prisoner of Her Past” The latter inspired the Kartemquin documentary film Prisoner of Her Past which Reich wrote, narrated and co-produced.