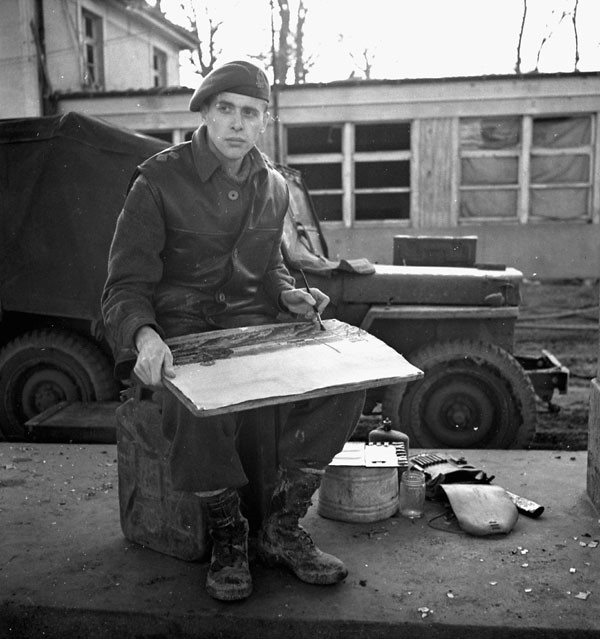 Alex Colville (1920-2013) is renowned as one of Canada’s most famous painters, acclaimed for his depictions of everyday life in the Maritimes. However, few know about the historically key role that he played in the liberation of Bergen-Belsen.

At age 22, the New Brunswick-based painter enlisted in the First Canadian Army after he felt a duty to serve in the Second World War. He was appointed as an official war artist and became a Second Lieutenant whose division landed at Normandy and fought at Juno Beach on D-Day. However, as Colville would later write, his most important assignment was his work at Bergen-Belsen where "There must have been 35,000 bodies in that place and there were people dying all the time.” He photographed and drew unprecedented scenes of genocide at the concentration camp to compose a record for the Allied liberation forces.

German philosopher Theodor Adorno remarked, “To write poetry after Auschwitz is barbaric." Similarly Colville asked: How does one create any art after the despair and horror of what humans have done to one another? How does one depict life in the wake of witnessing unprecedented trauma? This talk will address both Colville’s significant role at Bergen-Belsen as witness and documenter of the Holocaust. As well, it will explore how the chaos of Nazi Europe transformed his outlook and art, informing all his post-war work and laying a foundation for him to become one of Canada’s most iconic painters.

Dr. Sara Angel is a specialist in art crimes, Nazi-era art restitution, Holocaust-era art, and Canadian art history. She holds a PhD from the University of Toronto where she runs the Art Canada Institute. She has been a guest lecturer at Harvard University, the Royal Ontario Museum, the Art Gallery of Ontario, the National Gallery of Canada, and the Israel Museum.

Lunch provided. Space is limited; registration required. RSVP to Christie Nicoll at cnicoll@gluskinsheff.com or 416.681.6035. Address will be provided upon confirmation of registration.

November 2 at 12:00 PM (Registration at 11:30 AM)
Gluskin Sheff + Associates Inc.
Address provided upon confirmation of registration.