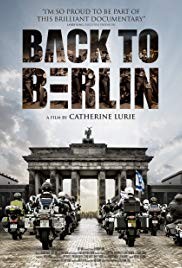 Back to Berlin (2018) – Documentary Film Screening
In 2015, the European Maccabi Games were held in Germany for the first time since the Second World War at the Waldbühne Stadium, site of Hitler’s infamous 1936 Berlin Olympics. The documentary follows eleven Israeli motor-bikers carrying the Maccabi torch from Tel Aviv to Berlin, retracing the tracks of early 1930s riders who set out from the British Mandate of Palestine to all corners of Europe spreading the word about the first Maccabi Games.

Screenings followed by a Q&A with Mr. Joe Gottdenker, one of the participants featured in Back to Berlin.