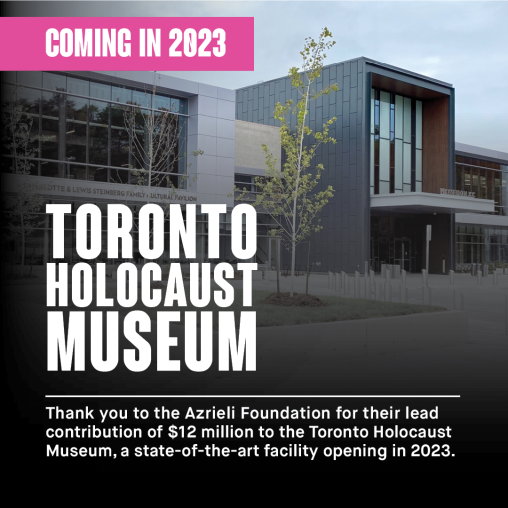 The Azrieli Foundation supports the future Toronto Holocaust Museum with a lead contribution of $12 million
September 1, 2021

Thanks to an extraordinary lead contribution of $12 million from the Azrieli Foundation, we are thrilled to announce that the new Toronto Holocaust Museum will open in 2023.

The state-of-the-art facility will feature groundbreaking technology and innovative approaches to Holocaust education. It will inspire visitors to think critically about the Shoah and to make connections between the Holocaust, contemporary antisemitism, world events, and present-day Canadian life. The Azrieli Foundation’s visionary gift is instrumental as the institution moves to its new home in the Sheff Family Building on UJA’s Sherman Campus.

“Holocaust education is changing, and we are taking bold action to meet twenty-first century challenges, using twenty-first century tools,” shared Naomi Azrieli, CEO of the Azrieli Foundation. “We are proud to provide the lead donation to the Toronto Holocaust Museum, bringing a visionary new program to Canadians.” Founded by Holocaust survivors over 35 years ago and known as the Sarah and Chaim Neuberger Holocaust Education Centre for the past ten years, the Toronto Holocaust Museum will build upon a foundation of excellence, ensuring that the lessons and legacies of Canadian survivors are never forgotten.

Glennie Lindenberg, Chair of the Renewal Project’s Council, extends her gratitude for this exceptional contribution: “As our plan for a new space becomes reality, we are most grateful to the Azrieli Foundation for their partnership and commitment to Holocaust education. We also want to extend our gratitude to the York family for perpetuating their family’s ongoing commitment to Holocaust education. In these troubling times of growing antisemitism, education has become paramount in combatting this hatred, and the Toronto Holocaust Museum is poised to be at the forefront of the battle against misinformation.”

We look forward to welcoming the public and students from schools across the GTA to the Toronto Holocaust Museum in 2023.

For more information on the project, visit www.holocaustcentre.com/revitalization-project.

If you are interested in making a contribution to the project, please email: btylbor@ujafed.org. 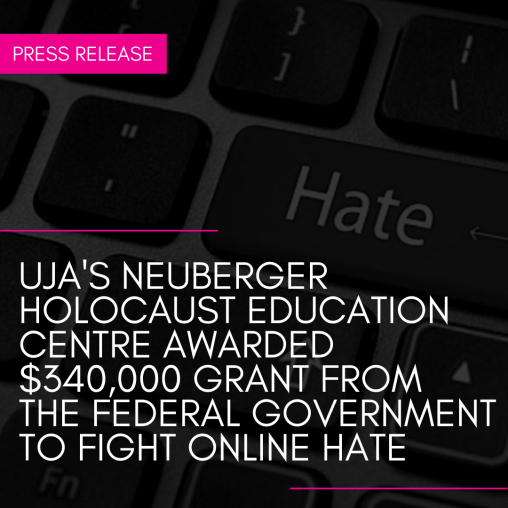 At the conclusion of the National Summit on Antisemitism in late July, UJA’s Sarah & Chaim Neuberger Holocaust Education Centre received a $340,000 grant from Canadian Heritage to fund the 18-month Online Hate Research and Education Project (OHREP). The OHREP will address the distressing surge of antisemitism and other forms of bigotry by exploring how extremist online culture shapes hate and dangerously influences youth and other groups. The results of this research will provide the community with the important data required in the fight against antisemitism.

Online hate is spreading faster than ever before. Too often, what starts with online radicalization can turn into real-world violence. As Canadians spend more time on social media – accelerated by the pandemic – online hate increasingly poses a serious and growing threat. Unfortunately, the ongoing trend of radicalization and hardening bigotries has also accelerated, with both Jewish and other Canadian communities facing harassment, threats, assaults, and in some horrific cases, murder.

OHREP will provide educators, parents, community security, policymakers, and students with the resources needed to identify and respond to this scourge. “We will work closely with the Neuberger to ensure that this crucial data informs our advocacy strategy in the online sphere, allowing us to demonstrate to elected officials and our partners at Facebook and Twitter the origins and spread of online antisemitism and hate plaguing so many communities across Canada.” said Noah Shack, Vice President GTA, CIJA.

This innovative project will employ researchers with expertise in hate and rely on the development of a diverse Youth Council to ensure the project reveals the most relevant and authentic examples of extremist online culture (i.e., memes and video games). White supremacists and other extremists target youth for indoctrination and radicalization, and the culture that OHREP will study is one of their main avenues.

“This project is essential to our development of programs that ensure the lessons of the Holocaust are relevant for the student of today. Armed with this knowledge, we will develop educator workshops and student programs that are responsive to the extremist online activities being used to spread hate and radicalize youth,” said Dara Solomon, Executive Director of the Neuberger Education Centre. Shari Schwartz-Maltz, Chair of the Toronto District School Board’s Jewish Heritage Committee, echoed the significance of this research, “We already know that some of our students are immersed in this dangerous world, and we are seeing real-world incidents of hate as a result. By rooting out the source, the school board can work with our communities to more efficiently respond to these incidents.”

The Neuberger will be working closely with the Canadian Anti-Hate Network while researching and interpreting the online content to ensure relevancy and accuracy. This will produce final deliverables reinforce CAHN's own resources, laying the groundwork for substantiative, forward-looking anti-hate work to be done in the future.

OHREP will launch in September 2021. Over the course of the 18-month period, the Neuberger will work closely with school boards, CIJA, and other community partners to ensure that the relevant data is accessible through a website, a guidebook, and ongoing workshops. 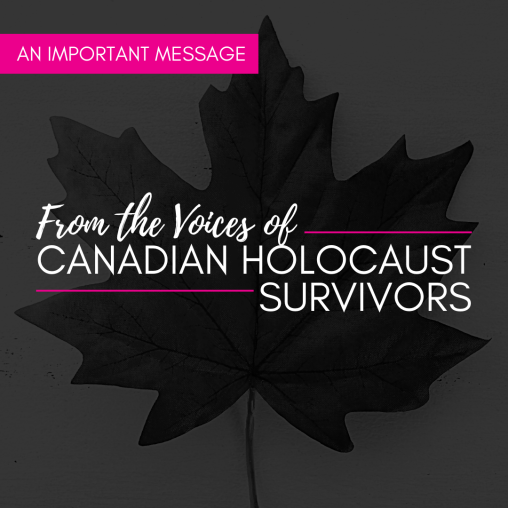 An open letter to all Canadians in trying times

In 1985, we, a group of Holocaust survivors proudly watched the unveiling of the Toronto Holocaust Centre (Neuberger Holocaust Education Centre). Alongside our peers, we relished in the joy of this momentous milestone knowing that we had ensured the lessons and legacy of the Holocaust would not be forgotten here, in our adopted home, Toronto. We held high hopes that the tragedy which we faced would be used as a cornerstone in educating others about the dangers of hatred and bigotry. We were grateful that the memories of our murdered loved ones would not only be in vain but could help promote a more peaceful and just world—a world where our children and grandchildren could grow up with diversity, education and most of all, freedom.

We are proud Canadians. We are grateful to this country that became our home after the war and allowed us to rebuild our lives, thrive, and create a bright future for our families. After enduring the worst forms of persecution, we found solace in a place that allowed us to live freely and peacefully, being who we are, proud Jews.

We know firsthand of the dangers of antisemitism. We were there. We were witnesses. Today, we are compelled to speak out against the alarming events of antisemitism we have witnessed here, at home, and abroad over the past months. It pains us greatly to once again see a rise in hate crimes of any kind. Jews being attacked in the streets—targeted simply for being Jewish. This is a reality we never thought we would be faced with again in our lifetime.

We stand for equality. We stand for peace. We stand for education. We stand for humanity in all its forms. It is our plea to you to stay educated and well informed about the history, about the current reality and be on guard for our civil society through understanding, acceptance and advocacy. It is on us, each and every one of us, to protect our democratic rights and freedoms that allow those of all backgrounds, races, ethnicities and religions to live peacefully and prosperously in Canada.

We are grateful to those in the Canadian government and other sectors of Canadian society, including business, academia, religious, and civic, who have taken a stance on these issues, calling out all forms of racism, antisemitism, xenophobia, hatred and especially, the misuse and minimalization of the memory of the Holocaust.

Take it from those who know firsthand, the dangers of unchecked hatred can and will destroy if we allow it. We are still hopeful that together, as a unified society, we can and will build a better tomorrow.